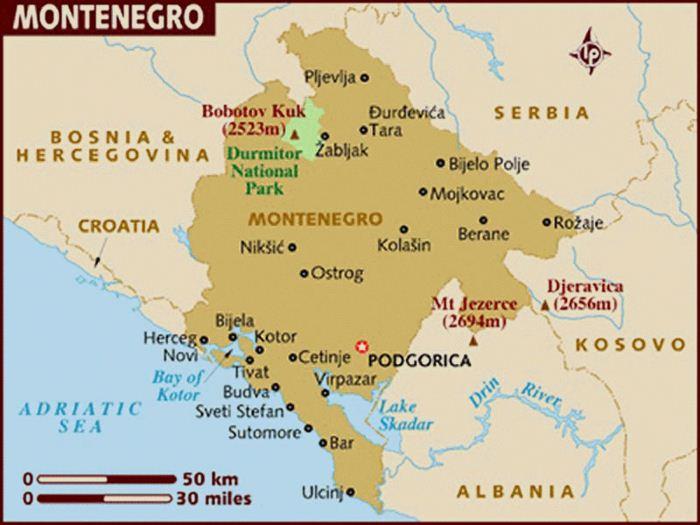 Montenegro was one of the six republics of the former Yugoslavia.

In 1992 as a result of Yugoslavia’s disintegration Montenegro created a new union with Serbia - the Federal Republic of Yugoslavia.

By June 2006 Montenegro had been a part of the confederal state Union of Serbia and Montenegro, occupying 13.5% of its total territory. Montenegro was declared independent on June 3, 2006.

One of the most amazing Mediterranean bays is the Bay of Kotor (Boka Kotorska). Boka Kotorska bay is composed of several smaller broad bays, united by rather narrow channels and forming one of the finest natural harbors in Europe.

The capital of Montenegro is Podgorica, which also is its administrative and economic center with 160 000 residents.

Cetinje, meanwhile is the historical and cultural center of Montenegro.

The official language in Montenegro is Montenegrin.

The currency - the Euro.

It has two international airports in Tivat and Podgorica.

The highest mountain peak is Bobotov Cook, at 2 522 m on the mountain range of Durmitor.

The largest lake is the Skadar Lake with 391 km2 of surface area.

The biggest bay is the Bay of Kotor.

The most important National Parks are Durmitor, Lovcen, Biogradska Mountain and Skadar Lake.

The Worlds Natural and Cultural Heritage - Durmitor Mount, Tara River Canyon and the Old Town of Kotor - are protected under the UNESCO.

Most of Montenegro is covered by high and extensive mountain ranges separated by rivers flowing through canyons and deep valleys. A large flat surface is located on the south near the coast.

The Montenegrin coast is a narrow line of land from Herceg Novi to the river Bojana on Albanian border. The coast is famous for its sandy beaches and rich subtropical plants.

The high mountain chains of Dinarides - Orjen, Lovcen and Rumija - rise gradually from the sea to the center of the country, forming a stunning beautiful background of Montenegrin coast.

The Zeta plain near Skadar Lake together with the Zeta and Niksic Valleys covers the largest flat area of Montenegro and its most fertile territory.

2/3 of Skadar Lake, the largest lake in the Balkans with an area of about 390 km2 belongs to Montenegro. It is the home of 264 species of birds, many of which are rare or endangered species. Near the Albanian border lays the only European natural nesting site for the Dalmatian Pelican.
Approximately, 40 species of fish live in the lake.

The climate is typical for Mediterranean regions with an average annual temperature of 17 degrees Celsius.

The swimming season goes from April until November, and transparency of the sea water is 38-56 meters deep.

Water. Montenegro is one of the richest countries in the world regarding the purity and quality of drinking water.

The historical and cultural capital of Montenegro is the city of Cetinje.

The official administrative center is Podgorica.

Visa control. The entry for European, American, Russian, Belorussian and Ukrainian citizens is visa-free for up to 1-6 months.

Mobile communications. In Montenegro there are three mobile operators: M:tel, ProMonte and T-Mobile.

Banks. Working hours are from 8 a.m. to 4 p.m. on weekdays with a lunch break between 1 p.m. and 2 p.m. Credit cards are accepted.

Retail Stores. Most stores are open from 8 a.m. to 9 p.m. with a lunch break between 1 p.m. to 2 p.m. Grocery stores open at 6 a.m. continuously without a break.

Car Rentals. To rent a car you just need a driver's license. It is recommended and cost-efficient to rent a car for more than 5 days.

The length of the beach is 73 km with wave heights of approximately 0,5 meters. The largest beach is Velika Pljaza in Ulcinj - 13 km.

Sandy beaches are located in Budva Riviera, some beaches of Lustica and Ulcinj Riviera.

Pebble beaches are in Tivat, Herceg Novi, Zanica, and Rosa.


Lipa Cave (http://lipa-cave.me/) is the first cave adventure in...


Niagara Falls in Kuca-Rakic village, one of the main tourist...